It’s always great when I get to work with a very active older patient that remains knowledgeable about their treatment options and elects to choose a minimally invasive approach to treating their knee pain.

The Denver patient I will discuss below had finally reached the point that he was told by other doctors that he needed to consider knee joint replacements. Viewing this as his last choice, he began to research alternative treatments. His research into stem cells led him to ThriveMD. He was very interested in a stem cell procedure that would be a knee replacement alternative and allow him to return to skiing. The techniques discussed in this case study hold true for 2017 and on. 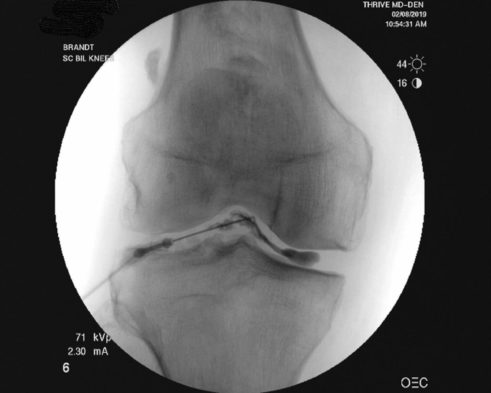 X-ray guided injection of the medial joint space of the right knee with stem cells.

This patient was a 76 year old gentleman when he came to my office for evaluation in April of 2013. He had spent many years as a highly competitive athlete in several sports including tennis and skiing and had worked in the sports industry for decades.

He began having right knee pain in 2000 and over the next ten years it continued to worsen. He also began to experience pain in the left knee over the last several years.

He remained physically fit and worked with a trainer and acupuncturist to try to remain active and keep his pain under control. MRI examination of the left knee was significant for medial meniscal degeneration, mucoid degeneration of the ACL and moderate arthritic changes in both the medial and lateral compartments.

MRI of the right knee was notable for a remote tear in the ACL, moderate to advanced arthritic changes in the medial and lateral compartments with partial loss of the posterior horn of the medial meniscus without acute tearing. 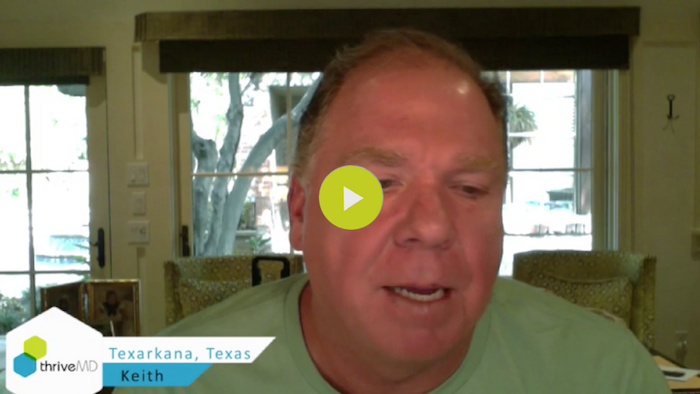 Patient in the video has used stem cell therapy to heal his knee, but is not the patient discussed in this case study.

Individual patient results may vary. Please contact us today to find out if stem cell therapy may be able to help you.

With the goal to avoid knee replacement surgery, the patient elected to go forward with an adult stem cell procedure that included knee injections of bone marrow concentrate (BMC), adipose (fat) derived stem cells and platelet-rich plasma (PRP). The procedure was performed in the late fall of 2013. He additionally underwent a PRP booster one month after his initial procedure. He began to experience a steady improvement in his pain in January and February of 2014. Given his rather advanced degenerative changes prior to the procedure and in an attempt to maximize his results, an additional booster shot of BMC and PRP was done in March of 2014.

Finding Relief from Knee Pain and Returning to Activity

His pain has remained stable in both knees throughout another ski and golf season. He is extraordinarily happy with his results and thrilled that he was able to avoid knee replacement surgery. He is willing to discuss the course of his treatment with other potential patients.

*Individual patient results may vary. Contact us today to find out if stem cell therapy may be able to help you.

If you believe you or someone you care about could be a candidate for stem cell therapy administered by a trusted clinic, please contact us today.